Construction of North-South Corridor back in full swing

Construction of North-South Corridor back in full swing

Those living, working nearby resigned to jams and noise, but look forward to its completion 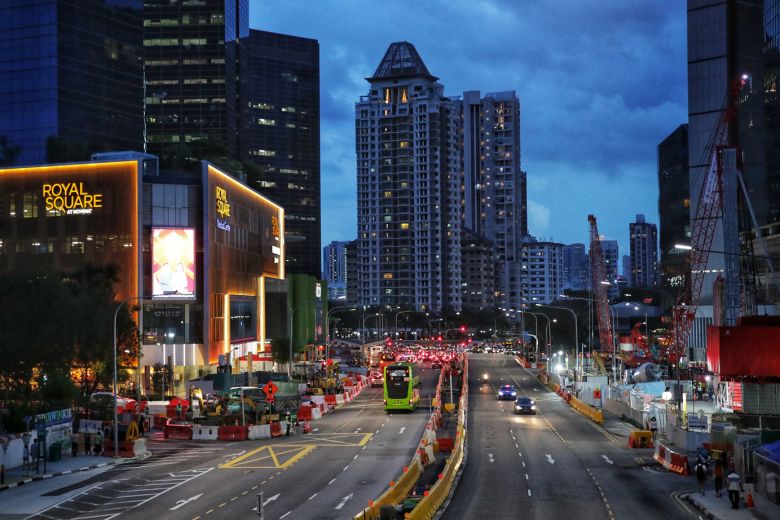 The junction of Thomson Road/Moulmein Road/Newton Road is one of the areas most affected by the construction of the North-South Corridor.

Exit Novena MRT station and one is immediately confronted by heavy traffic and a persistent thudding and drilling in the background.

A few car horns may toot. Paper signs direct pedestrians to walk in conflicting directions to their desired destinations.

The junction of Thomson Road/ Moulmein Road/Newton Road is one of the areas most affected by the construction of the North-South Corridor (NSC), a 21.5km expressway that will link the northern parts of Singapore to the city centre.

About $7.47 billion has so far been pumped into the project. The 14th - and last - civil contract for the NSC's design and construction was awarded last December, the Land Transport Authority (LTA) told The Straits Times.

More costs could be added until the expected completion in 2026, its spokesman said.

As the construction sector gradually recovers from the setback inflicted by the spread of Covid-19 in migrant worker dormitories, work on the NSC has now begun post-haste along the entire stretch, from Admiralty to Rochor.

The LTA recently said that further changes to the roads and underpasses leading to the malls in Novena will begin on Saturday, with the changes lasting until at least late 2022.

It is also still studying the impact of Covid-19 on the project's targeted end-date of 2026, and more works could be in the offing.

Those living and working there said they are resigned to the inconvenience.

A resident said the traffic jams and noise have become so much a part of life that it feels like it has been the case "since the dawn of time".

Many of those interviewed by The Straits Times said they did not know what the works are for.

"I don't know why there are works but they are there," was the common reply. Most added, however: "But it's not a big problem. I'm used to it."

Mr Fong Keng Munn, 25, who lives in a condominium in Newton Road, said he cannot remember when the works started, although he remembered being stunned one day when contractors began stripping the road of trees.

He said the noise from the drilling does not bother him much. What ticks him off is the often erratic lane closures, which can make driving from Thomson Road into Newton Road a nightmare.

"I don't know which lane to filter into," the software engineer said. "But there is always construction in Singapore. I am quite okay with it."

Housewife Grace Teng, 61, said there is always a jam at the junction on weekends. Her husband is usually the one driving but she feels frustrated just being in the car.

She hopes the LTA can provide real-time updates to motorists - using drone images, for instance - similar to those showing road conditions at the Causeway.

The LTA has been reaching out to condominiums and hospitals nearby to make sure they are kept abreast of the latest developments.

A spokesman for Thomson Medical Centre told ST that the authority has assured it that the number of road lanes leading to and from the hospital will not be affected, while the management committees of condominiums have been issued circulars so they can communicate to residents the nature of the works.

Originally conceived purely as an expressway in 2008, the NSC has since seen a change in concept to a "transit priority corridor", which means it will include dedicated bus and cycling lanes.

Marketed as a corridor for all, the NSC will see its bus lanes shave bus rides to and from the city by some 10 to 15 minutes, the LTA has said, while the cycling trunk routes into the city will go some way to bolstering Singapore's car-lite vision.

Motorists will benefit too, as the NSC, which when completed will intersect with existing expressways like the Seletar and Pan-Island expressways, will redivert traffic from the Central Expressway and shorten trips from the north to the city centre.

There are those who are looking forward to the project's completion.

An employee of a convenience store in Novena, who wanted to be known only as Mr Faishal, said it will "transform Singapore's transport".

As he sat on the pavement watching a barrier being erected by the side of the road, he added: "This is all just a minor inconvenience. We are a city, and cities evolve. There is no need to complain."