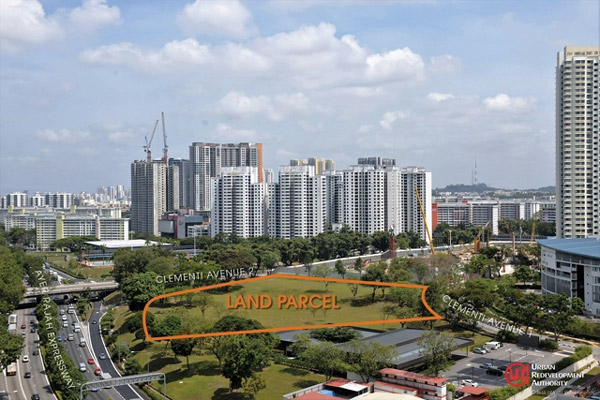 The tenders for a residential site at Clementi Avenue 1 (pic) and an executive condominium (EC) site at Canberra Link attracted healthy interest from developers with five and eight bids received, respectively.

A consortium comprising units of UOL Group and United Industrial Corporation (UIC) submitted the top bid of $491.3 million or $788 per sq ft per plot ratio (psf ppr) for the 99-year leasehold site at Clementi Avenue.

“We like this Clementi Avenue 1 site for the same attributes that contributed to the 100 percent sell-out for our adjoining development, The Clement Canopy. From our experience, we believe that there is very strong demand for this locale due to its close proximity to a strong educational cluster anchored by NUS, NUS High School and Nan Hua High,” said Liam Wee Sin, group chief executive of UOL Group.

“This site would attract not just homebuyers and upgraders but also investors given the catchment of potential tenants from nearby establishments such as One-North, Science Park and NUH.”

Liam revealed plans to develop the site into a 40-storey development comprising 640 units. “It is definitely a timely replenishment for our landbank given that The Tre Ver and Amber 45 are more than 75 percent sold,” he said.

The second highest bid was offered by CDL Constellation and TID Residential at $233.5 million.

Huttons Asia research head Lee Sze Teck noted that the batched tender closure of the two sites may have “a slight impact on the level of participation for the Clementi Avenue 1 site with more developers preferring to focus on the EC segment”.

This comes as demand for EC is considered as “more resilient as the deferred payment policy gives buyers of ECs an advantage”, he said.