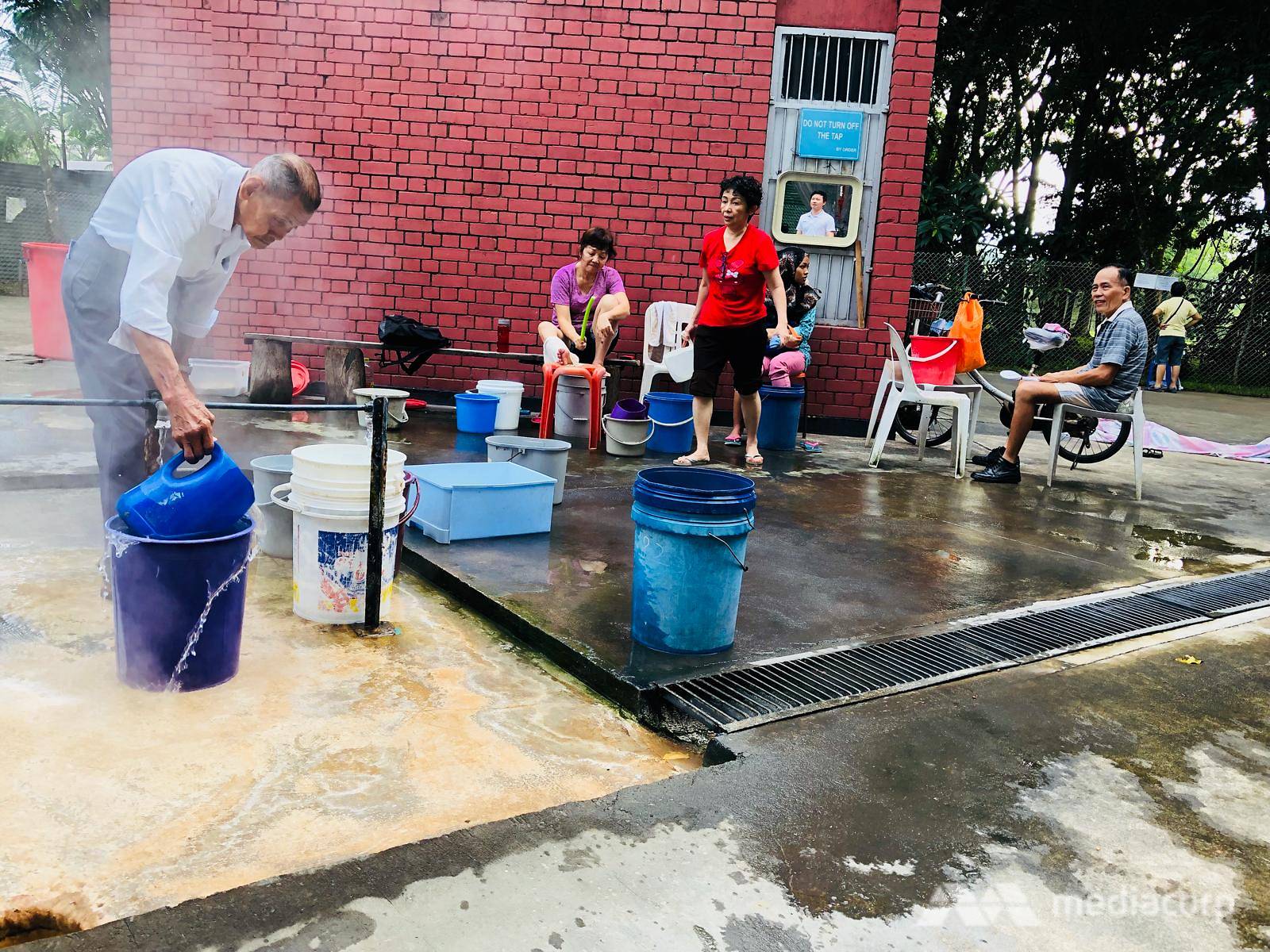 Before: People collecting pails of water at the Sembawang Hot Spring in 2017.

SINGAPORE: Where there used to be just drains, taps and buckets of very hot water, the Sembawang Hot Spring is now a park that boasts a cascading pool, cafe as well as a floral walk.

The park, the only natural hot spring park in Singapore, reopened to the public on Saturday (Jan 4). 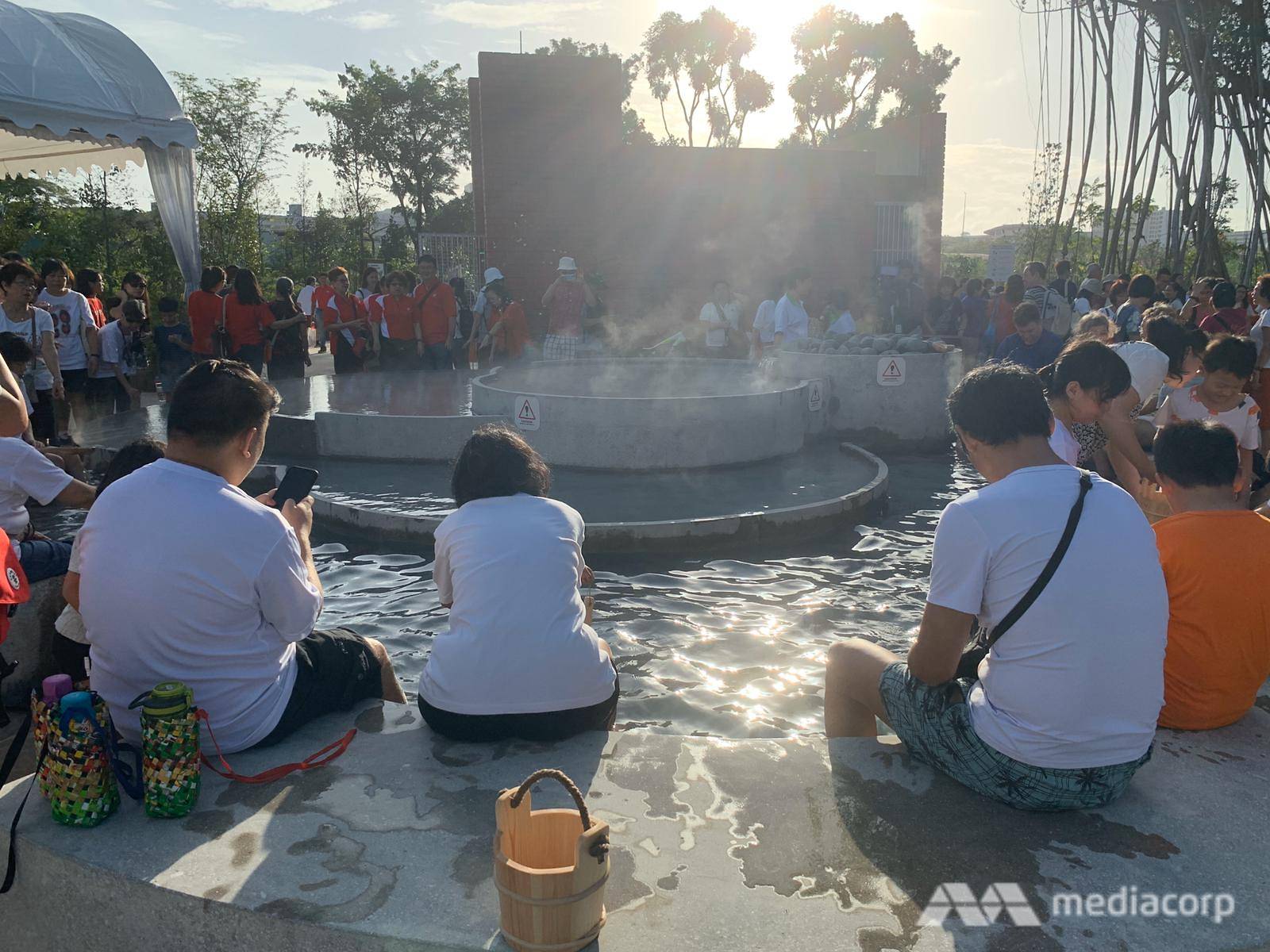 Now: Visitors having a foot bath at the new Sembawang Hot Spring Park on Jan 4, 2020

The 1.1-hectare park – nearly the size of one-and-a-half football fields – now has features such as a cascading pool, where members of the public can enjoy a foot bath. 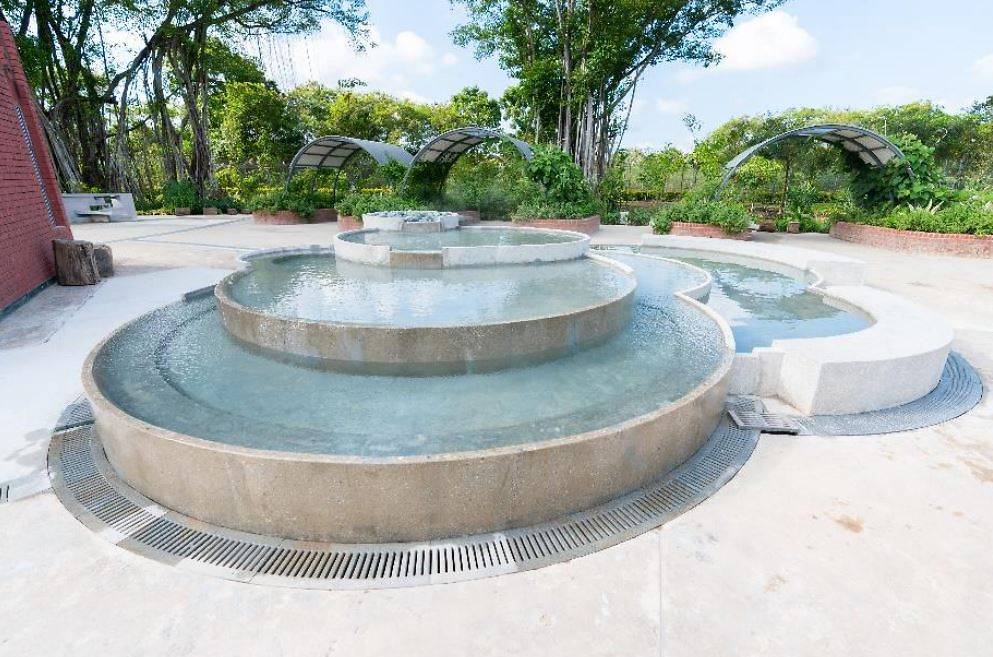 Taps at a water collection point supply the hot spring water at 70 degrees Celsius. The taps are installed at various heights with integrated tables and benches and allow for different sizes of water collection containers or buckets to be used.

Visitors can even cook eggs here in a separate receptacle - a popular activity at the hot spring before it was closed for redevelopment. 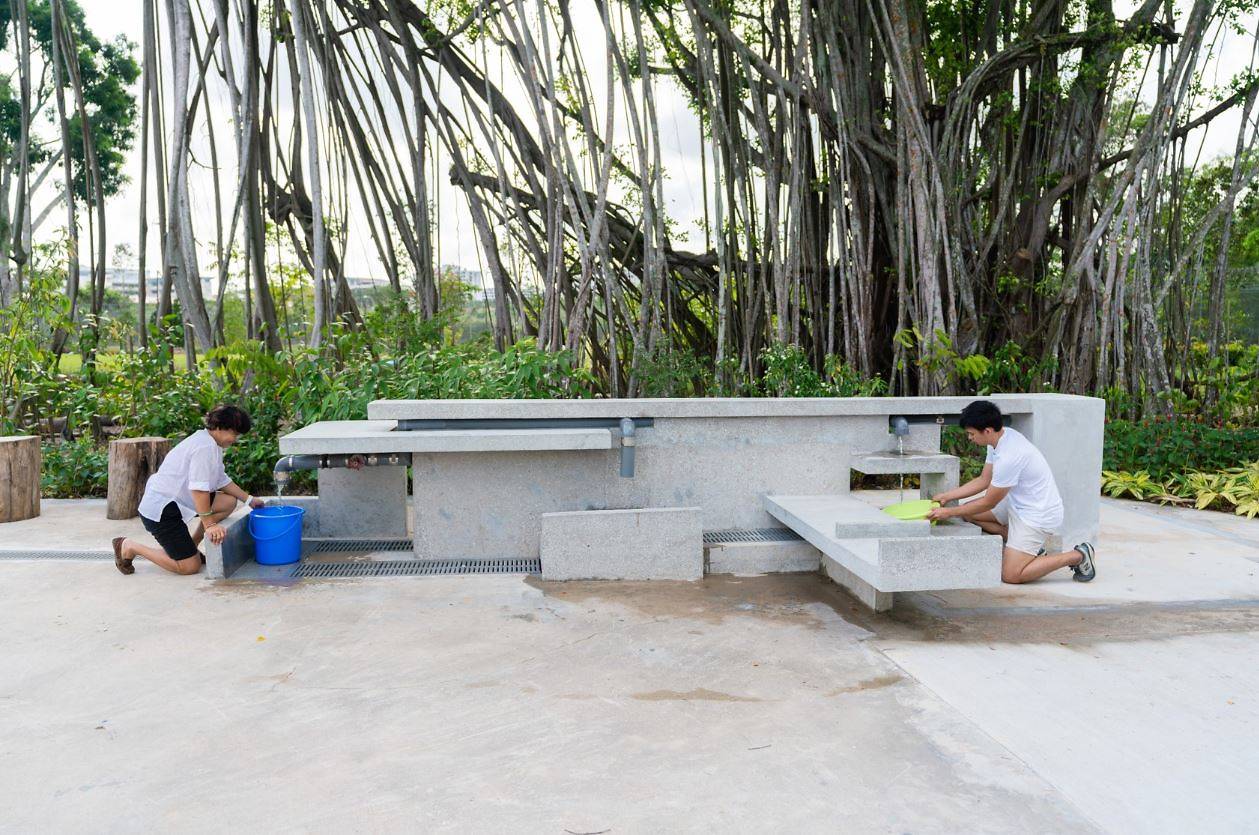 Children can play with warm spring water at an educational zone, where they can learn about the groundwater cycle.

At the entrance of the park, visitors are greeted by a floral walkway with fruit trees and edible plants such as ginger, rambutan and chiku as well as flowers commonly seen in the 1960s and 1990s.

The park's amenities have also been improved and there are now toilets, an activity lawn and a cafe. 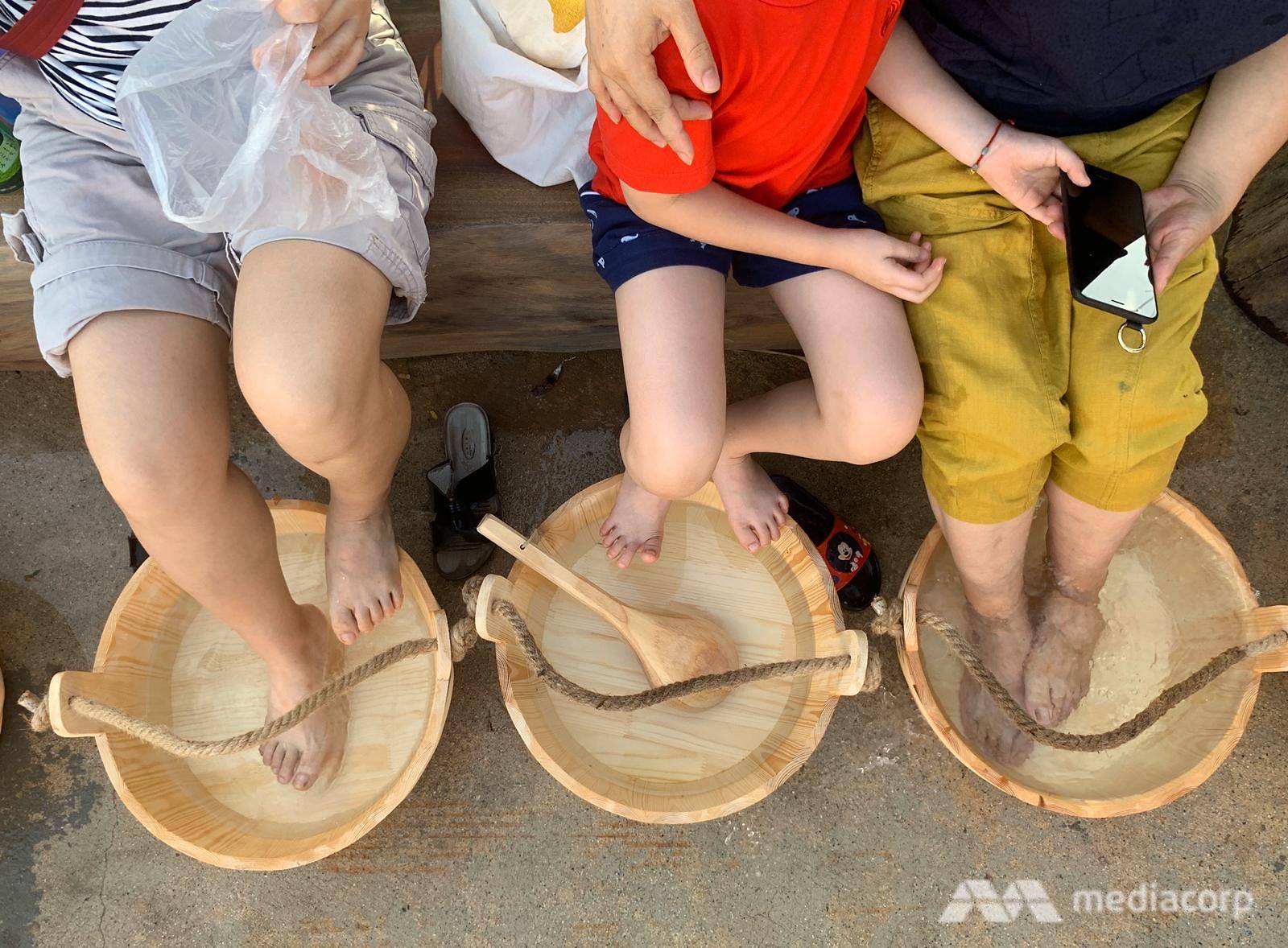 The park is the only natural hot spring in Singapore 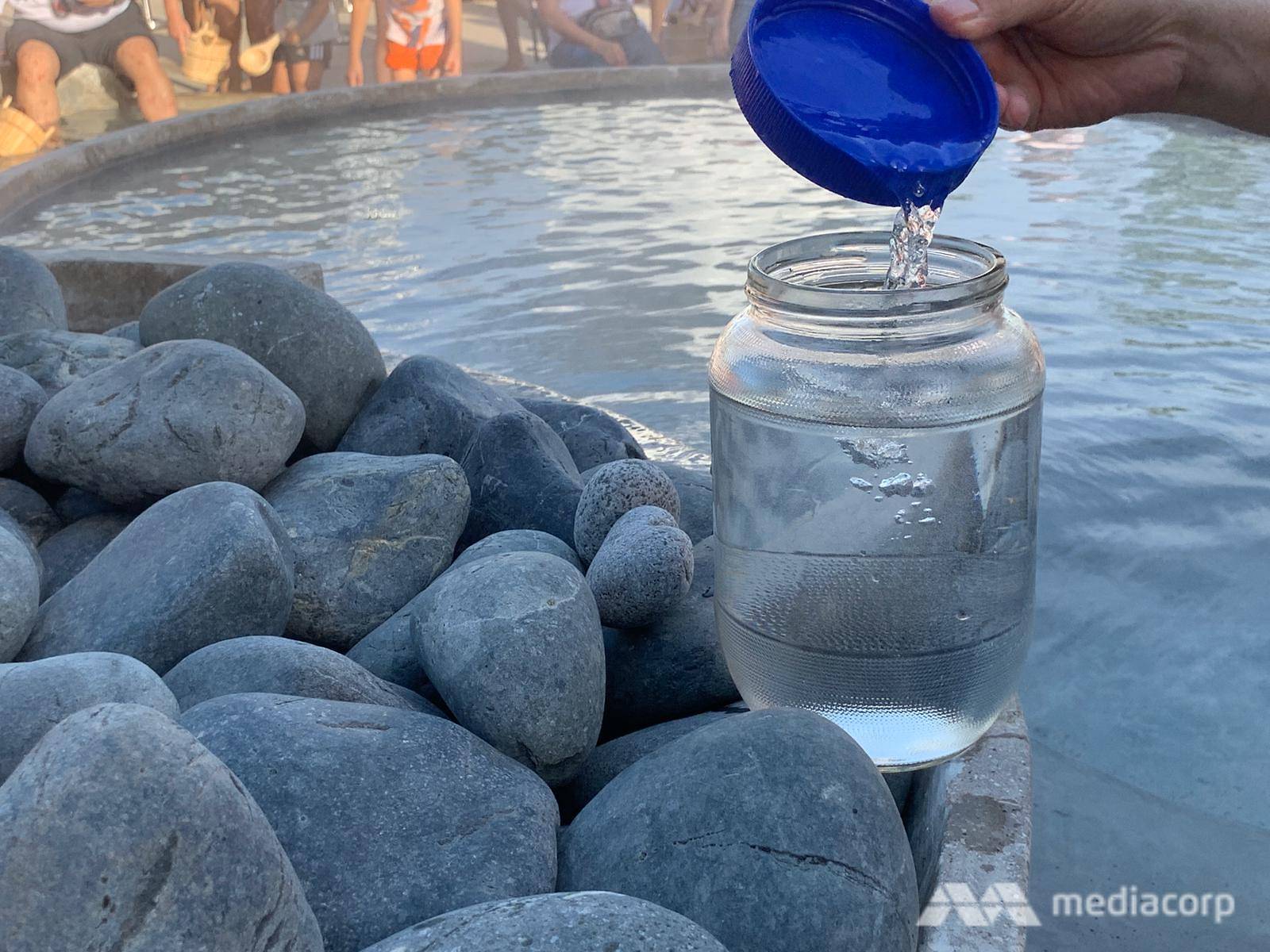 In designing the park, the National Parks Board (NParks) said it incorporated feedback and suggestions from the community after a public consultation in end-2017.

"This is the only natural hot spring park in Singapore today and it holds many collective memories for the community. It has a 'kampung-like' environment and a community spirit which NParks has tapped on and retained in the design of this unique park," it said in a press release. 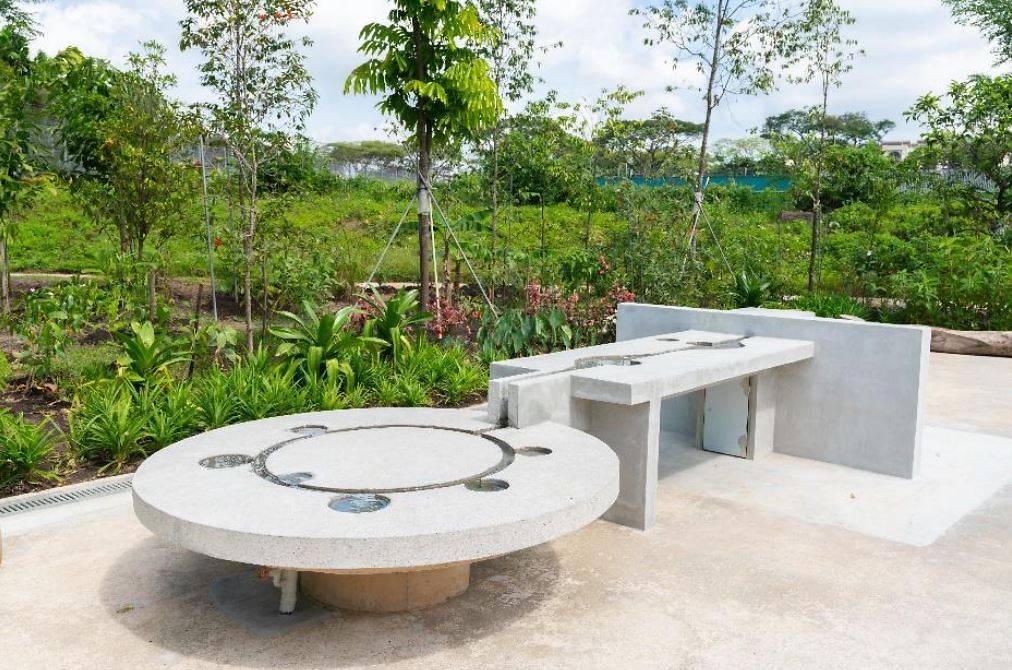 A water play feature at the hot spring park

Speaking to reporters, Mr Ong, who is also Education Minister, said that projects like the redevelopment of the hot spring bring out the "unique" character of Sembawang.

"In Sembawang, there is a lot of development going on - a new MRT station, we are building Bukit Canberra community hub, we are seeing new BTO (Build-to-Order) projects, viaducts.

"What we want to ensure is that as we develop, don't forget to 'sayang' Sembawang. Remember it is a place with history, with nature and its own character." 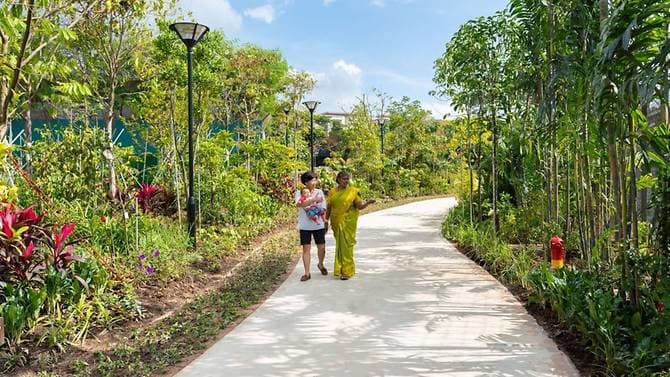 One of those who visited the park was Woodlands resident Madam Asmah Sooip, who said she was pleased by the refurbishment.

“The place is very nice now, it used to be like a jungle with only the spring water,” said Mdm Sooip, who was enjoying a foot bath at the park.

“There weren’t as many people last time as well ... But we are so happy (with the renovation) and will come back again for sure,” added Mdm Sooip, who last visited the hot spring in 2015. 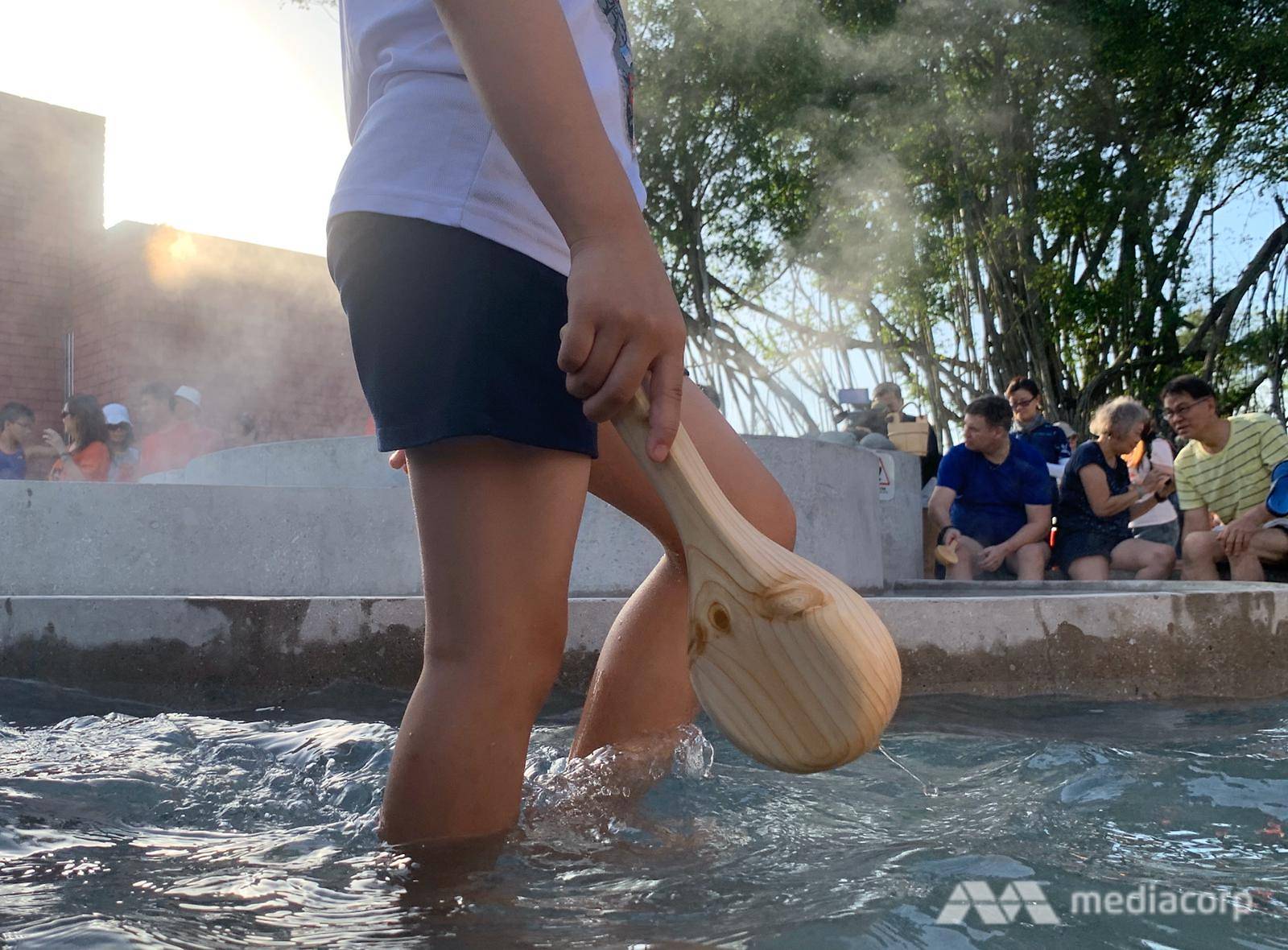 The park is open daily from 7am to 7pm

ONCE A BATHHOUSE FOR JAPANESE SOLDIERS

The hot spring was discovered in the early 1900s on the grounds owned by a Chinese merchant, Seah Eng Keong.

It was once a thermal bathhouse for Japanese soldiers, after their occupation of Singapore during World War II. Later in the 1960s, local media reported suggestions were made to develop the area into a tourist spa resort, restaurant, miniature golf course or nature reserve - but none came to fruition.

The land changed hands several times, before the Ministry of Defence returned the land to the state and renovation works began in August 2018.

Sembawang Hot Spring Park is open daily from 7am to 7pm. It is accessible via Gambas Avenue, and from the nearest bus stops 400m away at Sembawang Road. The nearest car park is located 400m away at 114 Yishun Ring Road.