Sembawang canal gets a facelift

Sembawang canal gets a facelift

SINGAPORE - Rain gardens, new footpaths and an array of flowers and plants now line the Sungei Simpang Kanan canal in Canberra, Sembawang, which has been given a facelift.

The improvement works by national water agency PUB was completed recently and unveiled on Sunday (Feb 23).

The rain gardens cleanse storm water runoff before it is discharged into the 13m canal, which stretches between Canberra Link and Canberra Street. They also improve water quality and also promote biodiversity in the area.

Foot paths constructed next to the canals provide access to the nearby Sungei Simpang Kiri park connector, while seating areas allow residents to relax and enjoy the landscape.

"A few years ago, I was cycling with Minister Khaw along Bukit Canberra, and the whole place was empty. Today, so many young families have moved into this area," he said. Mr Khaw is Transport Minister.

Mr Ong added that Canberra East is now also served by the Canberra MRT station that began operating in November 2019.

At Sunday's event, there was also a groundbreaking ceremony for new sports facilities for the estate that are slated to be completed by the fourth quarter of this year (2020). 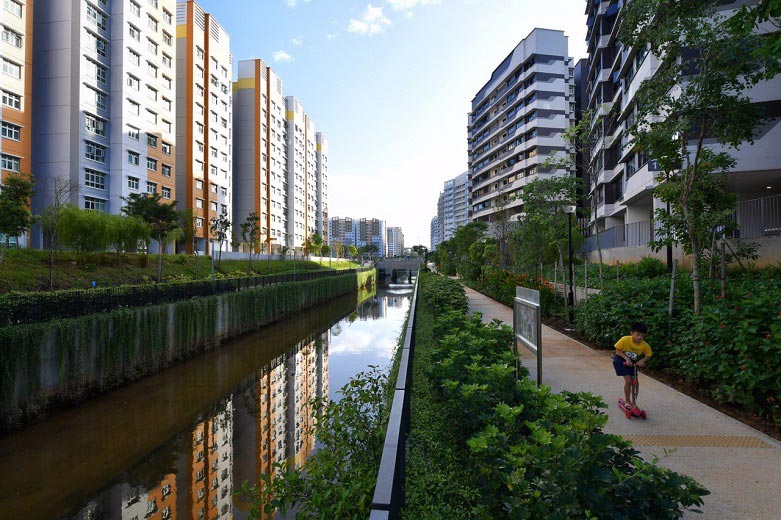 To be located in front of Blk 108A Canberra Walk, they will include an outdoor futsal court, a basketball court, three game courts. There will also be a BBQ pit near Block 108C Canberra Walk.

"The next stage of the development of this estate is the software," said Mr Ong, adding that two residents' committees (RCs) have been set up in the estate to organise activities for residents with two more on the way.

Canberra resident Tan Ming Wang, 30, an assistant manager working in the social sector, said the revamped waterway is a welcome addition to the neighbourhood. "It'll make my walk to the Sheng Siong supermarket more pleasant, and I recommend this canal to my parents for where they can come out for some fresh air and exercise."

The ABC Waters Programme was started in 2006 to spruce up water bodies here. So far, the PUB has completed 45 ABC Waters projects around the island .