Integrated North-South Corridor to be ready in 2026

Integrated North-South Corridor to be ready in 2026

Vehicles to run mainly underground, with lanes for buses; bike and pedestrian paths on surface 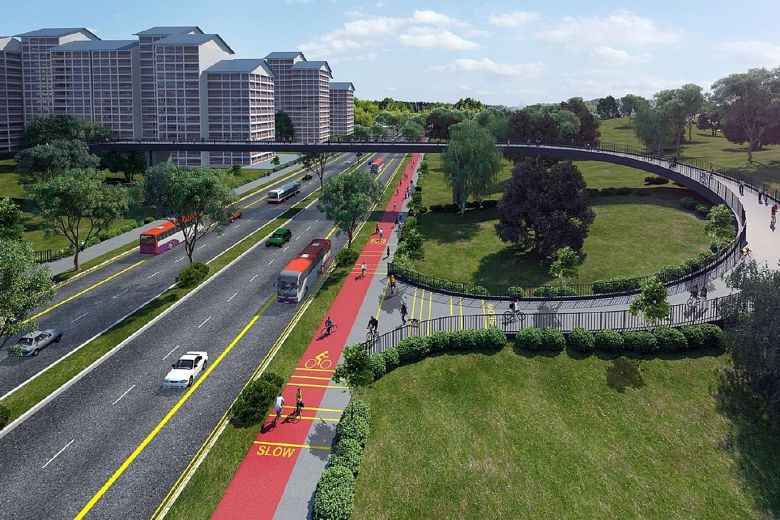 Artist's impression of the Marymount Road section of the North-South Corridor, Singapore's first integrated transport corridor that will have dedicated bus lanes and a cycling route. It will link towns in the north to the city. Major construction work will start next year, according to the LTA

The North-South Corridor, the first expressway here to have dedicated bus lanes and a cycling route, is targeted to be ready in 2026.

Major construction work on the expressway, Singapore's first integrated transport corridor, will start next year, the Land Transport Authority (LTA) said yesterday. It will be calling several tenders on the planned corridor to link towns in the north to the city in the coming months.

The project was initially a vehicular expressway to be completed in 2020, but it was announced in January that the highway will be redesigned as the first integrated transport corridor here.

There will be cycling and pedestrian paths throughout the surface of the 21.5km expressway. Vehicles will ply mainly underground, on a highway which will have one of three lanes in each direction reserved for express bus services.

Said LTA chief executive Chew Men Leong: "The North-South Corridor underpins our commitment towards a car-lite Singapore, by optimising our land transport infrastructure to better meet the needs of all Singaporeans."

With the new corridor, bus passengers travelling from towns in the north, such as Woodlands, Sembawang or Ang Mo Kio, could have journeys to the city shortened by up to 30 minutes. Besides long-haul routes, inter-town bus services could also leverage on it.

Yesterday, the LTA said the corridor's cycling path will link up with existing cycling infrastructure, including the Park Connector Networks and dedicated cycling path networks in HDB estates.

To prepare to build the corridor, LTA said it has been conducting works to "set back the boundaries of affected properties" in the past two years.

As 21 partial lots were acquired in condominiums, schools and commercial properties, existing infrastructure in the properties - such as perimeter walls, fences and drains - had to make way for the corridor.

The corridor will also be built close to road infrastructure such as the Marymount Flyover and Ophir Flyover, where traffic diversion on temporary structures and reconstruction of the flyovers are required, the spokesman added.

The LTA said "more sophisticated construction methods" will be used but did not elaborate.

While the authority did not say how much the reconfigured North-South Corridor would cost, estimates in 2008 pegged it between $7 billion and $8 billion.

The building of the corridor will be "intense", said Mr Chong Kee Sen, president of The Institution of Engineers, Singapore, as its tunnels will be close to existing infrastructure along the entire stretch. "We just have to proceed carefully."

Reference: Straits Times, Integrated North-South Corridor to be ready in 2026