Homebuyers drawn to live-work-play lifestyle in a green enclave

Some homebuyers enjoy the greenery, tranquillity and culture in the north while others are attracted by the price affordability of homes in the area. 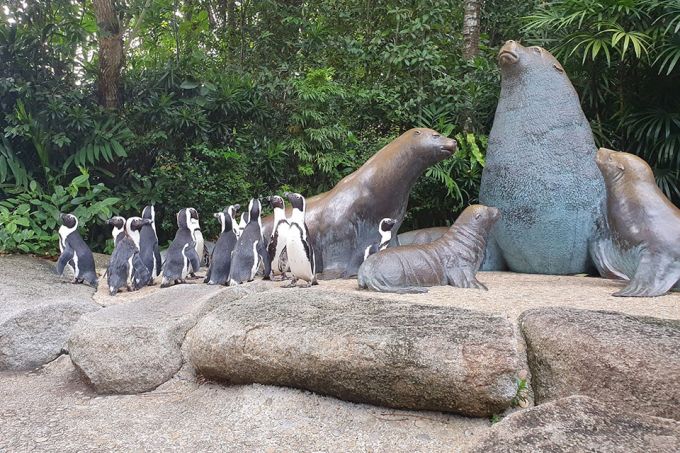 The three existing parks in Mandai - Singapore Zoo (above), Night Safari and River Safari are highly popular among tourists and Singaporeans

THE 'live-work-play' concept is fast becoming a global trend and common buzz word in the real estate industry. People are found to be happier living in a neighbourhood that provides for most of their needs. Many enjoy the ease of living near their work places, amenities and recreational spots.

Live-work-play communities are popping up in many suburban areas that mimic the convenience of living near the city centre.

The northern part of Singapore may grow to be one of the largest integrated communities that incorporate residential sites, commercial buildings, retail malls, business parks, gardens and entertainment facilities within a precinct.

The North Region is gaining popularity among home buyers and tenants.

Some buyers enjoy the greenery, tranquillity and culture in the north while others are attracted by the price affordability of homes in the area. Some potential buyers could also be capitalising on the investment potential of the region.

The leasing market, in particular, strengthened considerably over the past 20 years. 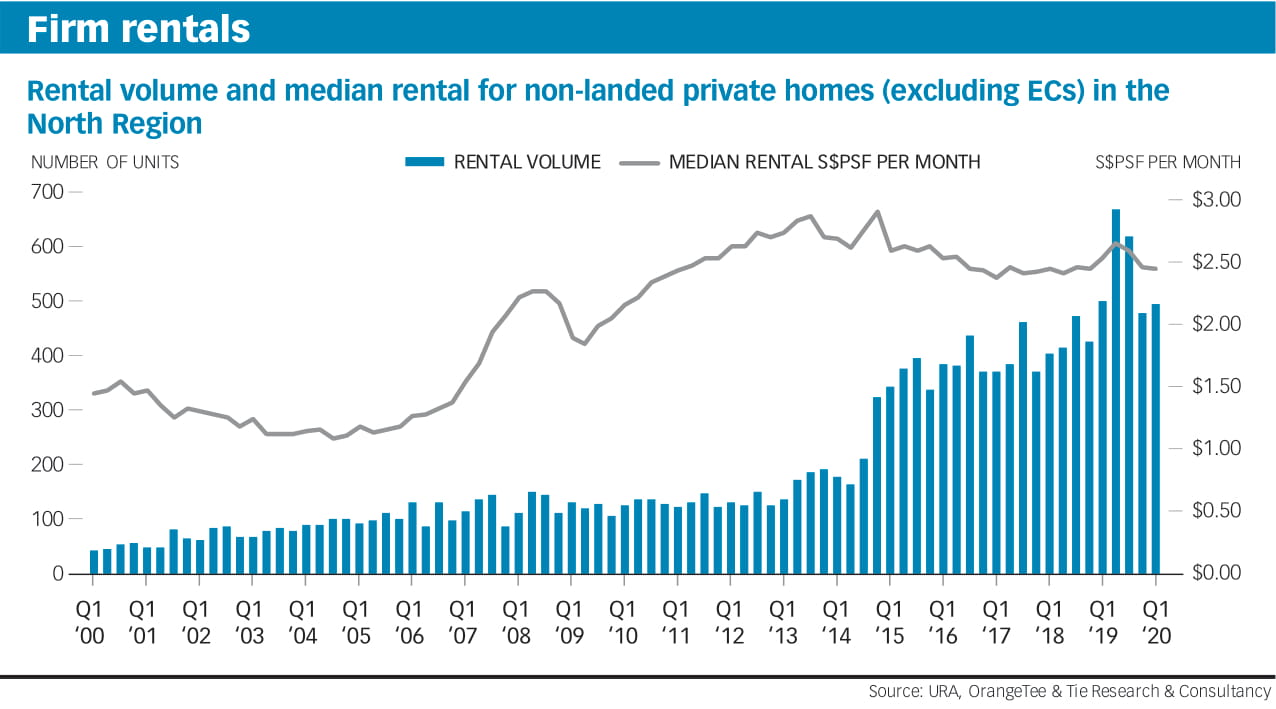 The rental market was propped up by a limited supply of private homes. There has been a hiatus of major private condominium launches, with only a handful of projects being sold in recent years such as The Brooks I&II, The Essence and Watercove.

The supply situation is further exacerbated as most recent launches are EC projects, which can only be leased after a buyer fulfils the five-year Minimum Occupation Period.

According to data downloaded from URA Realis, 6,381 EC units were sold in the North Region from 2010 to 2019, higher than the 5,711 non-landed private homes sold over the same period.

This year, only one project was launched, which was the 496-unit Parc Canberra EC. 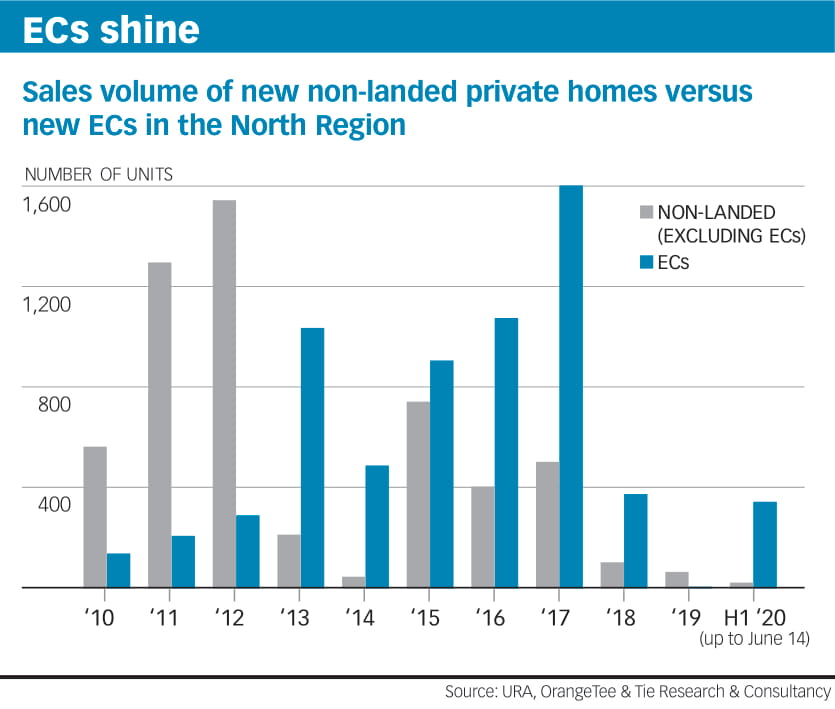 Transformational works on the cards

As many EC projects and Housing and Development Board build-to-order (BTO) flats were sold in the north, the number of younger dwellers has begun to swell in recent years. Therefore, it was a timely move for the authorities to review their concept plans to provide more facilities to cater to the needs of the growing population of families and young couples living there.

Based on the Urban Redevelopment Authority's Master Plan 2019, the North Region has been earmarked for some major transformational and rejuvenation works over the next decade. New neighbourhood centres, integrated developments, recreational facilities and community spaces will be constructed. The transport network will be enhanced while the green spaces and recreational areas will be expanded.

There is ample space for such expansionary plans as the region spans around 13,900 hectares of land area, which is about 19 per cent of Singapore's land area.

Despite its land size, it is the least populous area with over 570,000 residents based on the 2019 data from the Department of Statistics Singapore. In comparison, the Central, West and North-east Regions have more than 900,000 residents each.

The urban landscape has already been changed vastly over the decades. For example, Yishun town used to comprise farm lands and rubber plantations.

The Sembawang Naval Base built by the British government and opened in 1938 was also converted to a commercial shipyard called Sembawang Shipyard in 1968, under the management of Sembawang Corporation (now known as Sembcorp Industries).

Sembcorp Marine Admiralty Yard, as the facility is known today, specialises in ship repairs and upgrading. It is owned by Sembcorp Marine.

Currently, the area is renowned for its nature reserves and peaceful ambience that attract many outdoor lovers, cyclists, joggers, nature-lovers and fishing enthusiasts. It is home to various vegetable and goat farms which are highly popular among family visitors.

By 2024, the North Region will also be transformed into a new eco-tourism destination. Mandai is set to become a massive 126-hectare hub for nature and wildlife activities.

The Mandai nature and wildlife precinct will house five wildlife parks, nature-themed indoor attractions, green public spaces and a boardwalk along the edge of the Upper Seletar Reservoir in the next few years as part of an ambitious venture to create a multi-park experience for visitors.

Currently, the three existing parks in Mandai - Singapore Zoo, Night Safari and River Safari - are highly popular among tourists and Singaporeans. A new bird park and a rainforest park will be built in the next few years.

The parks, together with a new 338-room eco-friendly resort, will form a green tourism hub in Singapore which aims to attract millions of visitors a year.

Designed by WOW Architects, the resort will provide guests an immersive stay close to nature, and for the first time, provide the opportunity to stay over in a full-service accommodation at the doorstep of Singapore's wildlife parks.

The resort will engage guests to promote environmental awareness, sustainable best practices and the conservation of biodiversity.

Nature tourism is a growing industry around the world. The new attractions in Mandai are set to boost the investment and rental potential of properties in the vicinity.

We may expect many more tourists and locals visiting the Mandai precinct. The new attractions will likely improve footfall and shore up higher earnings for nearby retail malls and neighbourhood shops.

Jurong Bird Park will also be relocated to Mandai, where it will ensure the protection of bird species in its living collection, most of which are threatened in the wild, through programmes such as breed for release, assurance colonies and conservation research projects.

At the Rainforest Park, one can expect a multi-layered adventure - from a cavern to aerial walkways among tree-top canopies.

The new bird park is slated to open in 2022, with the other wildlife parks, attraction experiences and public spaces to open progressively through to 2024.

A newly-constructed bridge to provide a safe passage for wildlife crossings was completed in December last year.

For the first time in 60 years, the two forest patches of the Central Catchment Nature Reserve on both sides of Mandai Lake Road have been reconnected by the Mandai Wildlife Bridge.

Outside the wildlife parks, guests can move about in the green public spaces where there will also be recreation and dining available.

Buyers who are hunting for a home near a nature reserve and away from the hustle and bustle of city living may find the North Region a good option. Imagine immersing into the beautiful forest surroundings and enjoying a sensory connection with nature every day. Such soothing environment and enviable tranquillity will soon be within the reach of residents living there.

Based on the URA Masterplan, the number of park connectors and green spaces will be increased substantially to host a myriad of recreational attractions and community spaces.

The Singapore Racecourse at Kranji will be redeveloped into a new leisure space for families, the young, and the old.

Connectivity to various nature parks and green spaces such as the Kranji Marshes, Sungei Buloh Wetland Reserve, and the Mandai Mangrove and Mudflat Nature Park will be improved.

Good food also abounds in Singapore's north, including the famous Chong Pang Nasi Lemak which is open in the evening to the next morning, 928 Yishun Laksa, Lit Lit Sin Dessert and Holy Cow Creamery.

Reference: The Business Times, Homebuyers drawn to live-work-play lifestyle in a green enclave