Admit it, Singaporeans love a property fairytale. There's the ubiquitous (and highly profitable) Pinnacle @ Duxton BTO project and also the rise of Bukit Panjang from sleepy suburb to regional hub in the past decade. Now, Canberra could be the next in the list. With the new Canberra MRT station, as well as upcoming amenities and housing projects in development, Canberra looks to be a town that will see rapidly rising property values.

And this article reveals how Canberra's fairytale will pan out:

Located between Yishun and Sembawang, Canberra was once dotted with kampongs (villages) as well as rubber, gambier and pineapple plantations, the area’s name is inspired by a former British naval base in Sembawang that used to protect Singapore’s northern coastline.

Fast forward to today, and Canberra is now a popular residential area in the North of Singapore for upwardly mobile young families—a more laid-back version of Punggol with a greater sense of space. To date, 13 HDB BTO projects have been launched in Canberra, and by the end of this year 8,018 units of BTO flats would have been built in the span of a decade.

If you want to live in an HDB flat in Canberra, now's a good time: some BTO projects there have just attained their five-year Minimum Occupation Period (MOP).

In February 2020, HDB also launched an HDB Built-to-Order (BTO) project in Canberra. Consisting of 1,420 HDB BTO flats, the project will be built right next to Canberra MRT station with a range of amenities such as food courts, a supermarket, shops and childcare facilities. The upcoming HDB BTO project will also feature the entire range of 2-room, 3-room, 4-room, 5-room and 3Gen units. 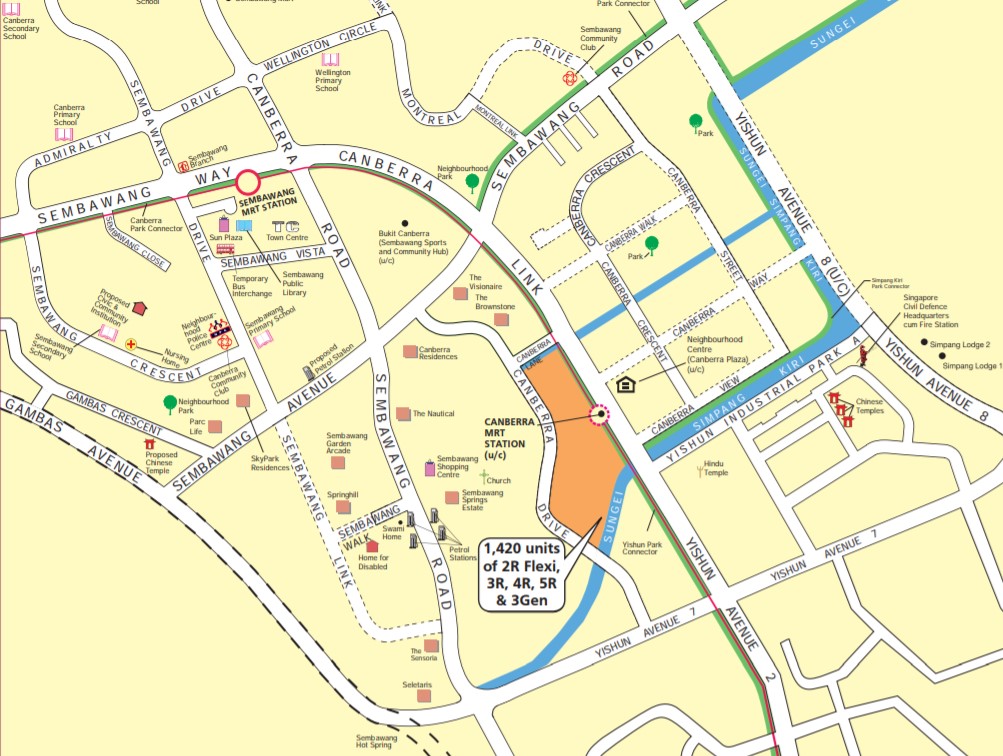 The upcoming HDB BTO project in Canberra occupies a prime site in the town.

The upcoming HDB BTO project in Canberra occupies a prime site in the town.

Canberra will soon have two ECs to add to its growing list of condos. In July 2019, an EC site at Canberra Link was awarded to property developer MCC Land for $233.89 million, which works out to a land rate of $566 psf per plot ratio. This yet to 99-year leasehold EC will have 385 units and be within a six-minute walk to Canberra MRT. The developer has yet to announce a launch date for this project.

Then in September 2018, developers Hoi Hup and Sunway won a $271 million bid for a slightly larger EC site next to MCC Land's, which works out to around $558 psf per plot ratio. The development would then be named Parc Canberra, a 99-year leasehold project with 496-units and be within a five-minute walk (300m) to the Canberra MRT station. On its opening launch in Feb 2020, the project sold 64% or 316 units out of the 496 units at an average price of $1,085 psf.

With the number of affordable ECs in the pipeline, Canberra might soon be taking over Punggol as the place for ambitious, upwardly mobile young families to set up their first home.

Will Canberra MRT station lead to a jump in property value?

The new Canberra MRT station on the North-South Line was opened on 2 November 2019. The new station will serve over 17,000 households in the vicinity, reducing travelling time to the Central Business District (CBD) from 50 to 40 minutes, and offering easy access to Northpoint City shopping mall just one MRT stop away in Yishun.

In what's sure to be music to many residents' ears, Canberra MRT station is also expected to raise property values in the area. According to a study published in 2017 by the NUS Department of Real Estate, residential properties within a 400m radius of the closest MRT stations could be priced at an average of 13.2% higher than those further away.

Thanks to the compact size of Canberra town, about 75% of units, including the Feb BTO launches and two ECs, will be within walking distance to the MRT station, which also has 500 bicycle lots.

North-South Corridor: Not just for motorists

Although there seems to be a lack of public transport routes in Canberra at the moment, connectivity will be boosted when the North-South Corridor (NSC) opens by 2026. The new expressway will link residents in Woodlands, Sembawang, Canberra, Yishun and Ang Mo Kio to the CBD and reduce travelling time by up to 30 minutes. 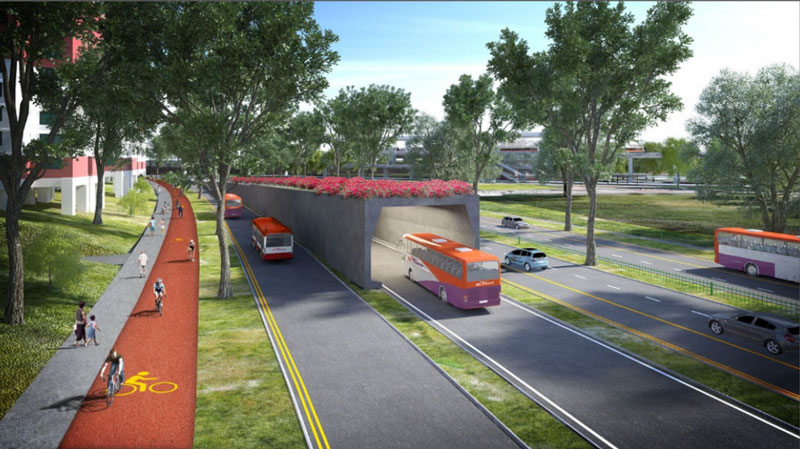 The 21.5km-long NSC is touted as Singapore’s first integrated transport corridor, featuring dedicated bus lanes and cycling trunk routes, which will link the various park connectors and dedicated cycling paths within the HDB towns along the corridor to the city centre.

Aside from improving the liveability of residents in Canberra, the new infrastructure will also make private and public housing in the area more attractive, said Christine Sun, Head of Research and Consultancy at OrangeTee & Tie.

She noted that non-landed private homes in Canberra, excluding ECs, have been transacting at an average price of $854 psf in the first three quarters of 2019. While this is still more affordable compared to other estates in Singapore, it is 71.8 per cent higher than the average price of $497 psf recorded in Canberra a decade ago.

Sun added that property market sentiment is still resilient, and going forward, she expects to see further price growth and demand for residential properties in Singapore, including in Canberra. 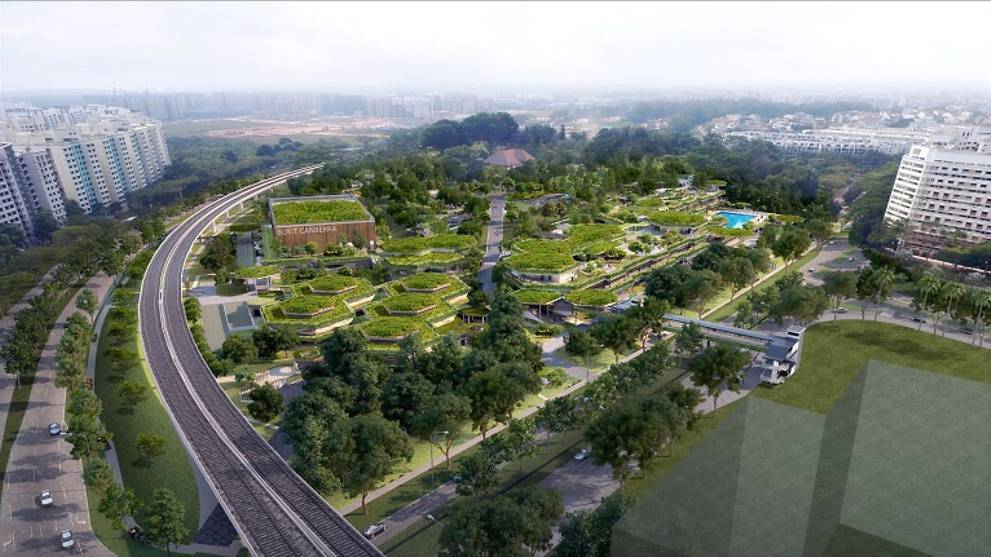 As if Canberra MRT isn't big enough an amenity, the government has announced the construction of Bukit Canberra, an integrated sports and community hub the size of 20 football fields.

Some of the amenities that residents can look forward to at Bukit Canberra include a 16,146 sq ft ActiveSG gym, the biggest one yet with indoor and outdoor swimming pools to boot, a 500-seater indoor sports hall, 3km of outdoor running trails, a “fruit orchard” and a “food forest” featuring a variety of locally grown fruit and crops, a community garden, hawker centre, polyclinic and senior care centre.

And there's also Sembawang Park not too far away, if you crave a little seaside relaxation.

With a gross floor area of about 118,404 sq ft, the mall will offer all the necessary amenities for the convenience of residents living in the nearby HDB flats, condominiums and landed properties, such as a supermarket, food courts, restaurants, clinics and enrichment centres. There will also be gardens, walking trails and a water play park for relaxation and community bonding. 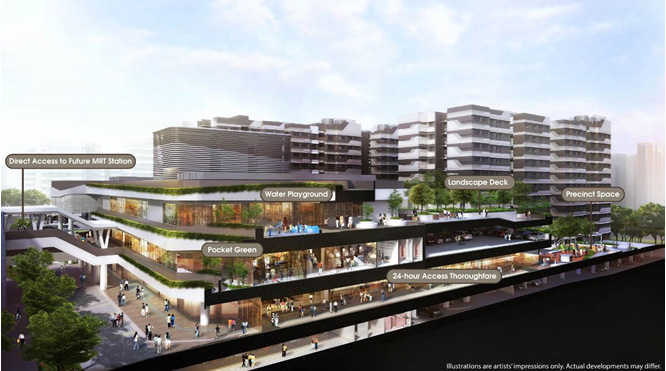 Canberra Plaza is one of several neighbourhood centres that have been built in HDB towns over the years. Other examples include Pioneer Mall in Jurong West, Punggol Plaza, and Seletar Mall in Sengkang.

The only downside would be that Canberra Plaza is smaller compared to Seletar Mall, for instance. At 188,000 sq ft, the six-storey Seletar Mall boasts a Shaw Theatres cinema. That said, those yearning for more dining and entertainment options can always make the 10-minute trip to nearby Yishun's Northpoint City.

Oh, and let's not forget the venerable Sembawang Shopping Centre, famous for being the first air-conditioned mall in Singapore.

Will there be property value upside in Canberra?

According to data from the Urban Redevelopment Authority and OrangeTee & Tie, Yishun Emerald along Canberra Drive is considered the most affordable condo project in the area, with 12 units sold so far this year at an average price of $705 psf. Completed in 2002, the 99-year leasehold project comprises 436 units.

The most expensive project along this stretch is Eight Courtyards, which moved 25 units during the same period at an average price of $962 psf. The 99-year leasehold condo with 656 units was completed in 2014. 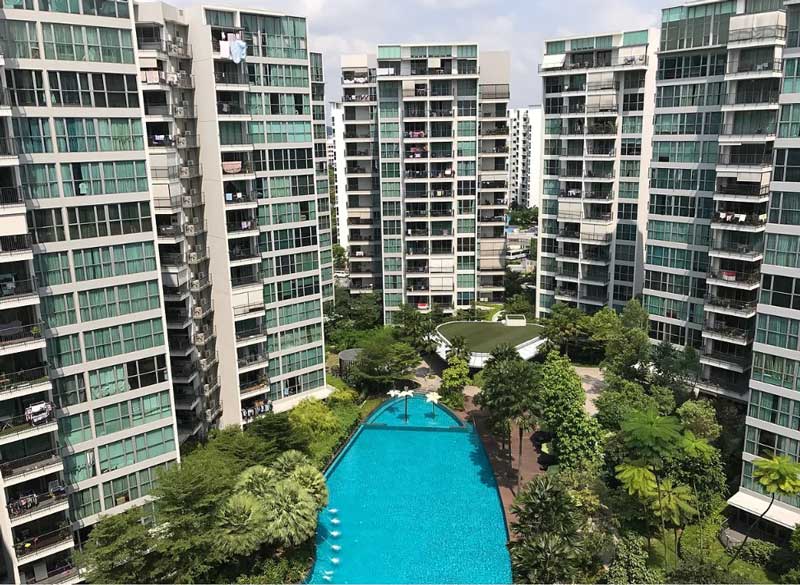 Tan Tee Khoon, Country Manager at PropertyGuru, believes that Canberra’s status as a new estate means that property prices are still understated compared to more developed towns such as Yishun and Buangkok.

He reckons that property prices in Canberra are currently about 10% lower than in Yishun. As such, there is potential upside for property buyers.

“I see Canberra on track to gaining popularity in the near future. The upcoming developments in the area offer plenty of promise for home buyers regardless of the economic headwinds,” said Tan.

While the addition of Bukit Canberra and Canberra Plaza will create more buzz and hype in the neighbourhood, many residents are also happy that some of Canberra’s rustic charm will be retained.

In fact, Canberra’s history will be celebrated with the opening of the former Admiralty House on the grounds of Bukit Canberra, where visitors can learn more about the area’s naval heritage.

Another unique landmark in Canberra that is currently being revamped and slated to open in January 2020 is Sembawang Hot Springs Park along Gambas Avenue. Discovered in 1908, the natural hot spring was previously used for bathing, soaking and cooking eggs. The new park will include lush greenery, a café, and a cascading pool where visitors can enjoy a foot bath in the hot spring water. 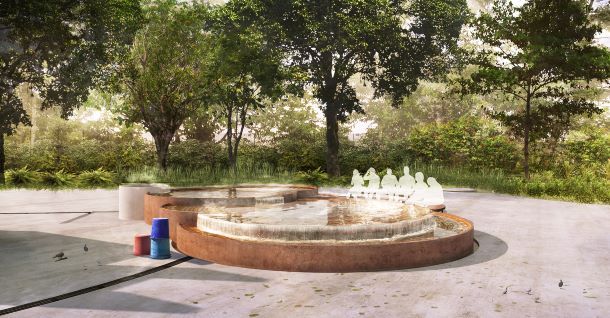 Canberra looks to be a sought-after destination for young families, especially since a further two primary schools and one secondary school is part of the estate's plans.

While property prices in Canberra are still very affordable, home buyers need to be aware that prices have been rising quickly in recent years due to ongoing development and improved connectivity.

In particular, the uplift from the opening of Canberra MRT station means that average prices of private homes in the area are likely to breach the $1,000 psf mark soon. As such, buyers looking to purchase property in Canberra may want to act soon or risk paying a higher price.